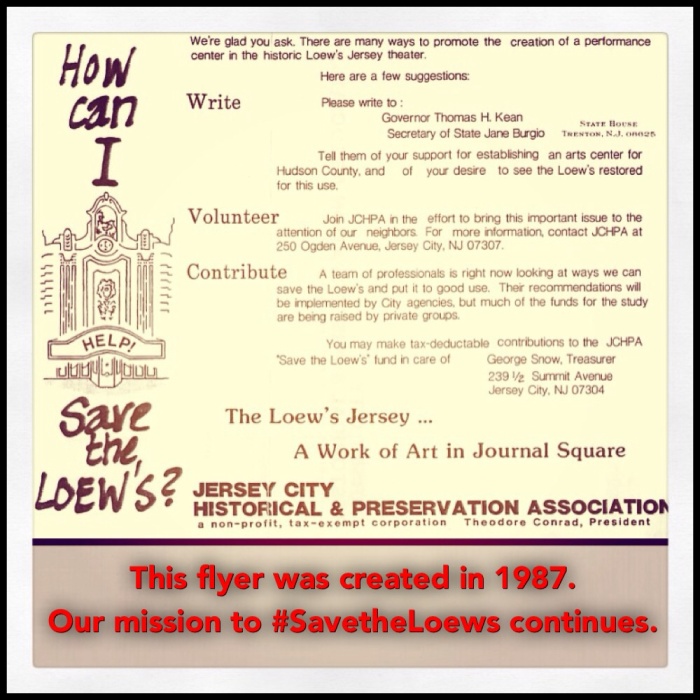 Friends of the Loew’s began as a committee of JCHPA (it was first called the Save the Loew’s Task Force of JCHPA).  When the effort to save, restore and then operate the Loew’s grew too big, we realized we had to become a stand alone entity.  Most of the young people associated with JCHPA gravitated toward the Loew’s project, while most of the older folks (many were elderly) stayed with JCHPA, which is unfortunately why the entity sort of petered out.

Theodore Conrad (shown on the flyer as JCHPA President) was in his eighties, although he worked with all of the young’uns on the Loew’s.  He was a very interesting guy.  He was an architectural model maker before the days of CAD who worked for many of the great American architects on some of the greatest building projects of mid-20th Century, including Lever House, the Chase Manhattan Bank headquarters, MOMA and John Kennedy’s grave.  He was born in Jersey City and kept his business here, never moving more than a half block from where he was born.  He is the man who led the effort that saved the really beautiful Hudson County Brennan Court House on Newark Avenue when IT was going  to be torn down.  A few years ago, the  County finally put a plaque up in tribute to his effort in the Court House. He was also involved in many other preservation and civic improvement projects, including the creation of Liberty State Park — where there is a road named for him.  And he was an inspiration and mentor to John Gomez.

Fight to Save the Loew’s

< Previous Next >
+ Add your own event Eventbrite